Augustine School’s history begins with a simple but powerful reality: a dream shared among friends. Three local families began to meet together in 2000 to discuss, plan, and prayerfully consider starting a school in Jackson, Tennessee. Those founding families included Dr. Bradley G. Green (Union University) and his wife Dianne, Dr. Paul Munson and his wife Betsy, and Dr. Glenn Marsch and his wife Cindy.

Just a year later in 2001, Augustine School was founded and opened its doors with 13 students in its first class (grades 1-4). At that time, students met on the property of Englewood Baptist Church’s Block Building until the fall of 2004 when the school acquired its current land and building at 1171 Old Humboldt Road in north Jackson, right off of the 45 Bypass.

Since 2004 Augustine School has grown year after year, with the addition of the Upper School in 2011. In 2015, Augustine celebrated its first graduation ceremony honoring senior students who received their high school diplomas. As we look toward our future, we are excited for the prospect of further establishing Augustine's legacy of Classical Christian Education for the glory of God. Click below to learn more about how you can support the ongoing vision of Augustine School. 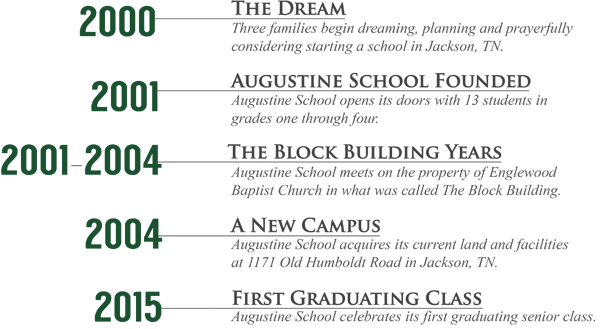